For most people, a mosquito bite is an annoyance. For nearly half a million people in the world, it can be a death sentence.

Mosquitos notoriously carry the parasite that spreads malaria, infecting 200 million people every year. Of those infected, 400,000 will die. Tragically, most are children.

Malaria is the third deadliest disease across the globe for children under age 5. Africa is by far the hardest hit, where heartbreakingly one child will die every minute from malaria.

But these deaths don’t have to happen. Malaria is preventable and curable. Together with you, we are waging a war against the scourge of malaria on two critical fronts, through treatment and prevention.

Staggering amounts of standing water remain. Sadly, these conditions provide the ideal breeding ground for mosquitoes in an environment already rife with the transmission of malaria. 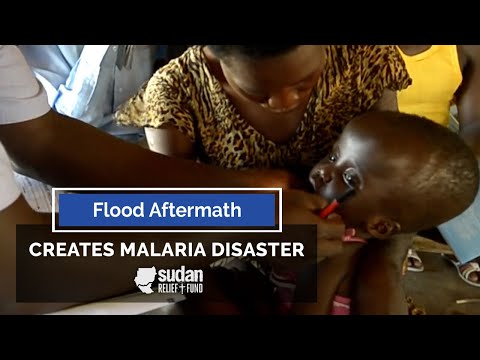 Ten year-old Ibrahim and his family were victims of the devastating floods in the heavily affected region of Malakal. They hastily grabbed as many belongings as they could carry over their heads when the floodwaters engulfed their home. Like many others, his family trudged over 40 miles in waist-deep waters to reach higher ground. When they arrived exhausted and collapsed onto dry land, they could do nothing but wait for relief to arrive.

Quickly growing dehydrated and malnourished, victims like Ibrahim become vulnerable to malaria. Sleeping outside by the waters with no shelter, no mosquito netting, and no medicine, just one bite from an infected mosquito can start the clock ticking toward a deadly scenario.

The onset of malaria is an insidious process, as the first symptoms of fever, headache, and chills may not appear for 10 to 15 days, and may be mild or difficult to recognize initially. But timely intervention is paramount. If left untreated, children like Ibrahim can rapidly progress from mild to severe illness and death within a mere 24 hours of the symptoms first showing.

With swift intervention, an infected child can be completely cured. That’s why we are committed to both treatment and prevention solutions to stop the onslaught of malaria. And with your help, we are making headway.

Your support is making an impact. In 2021 alone, more than 250,000 people received critical malaria treatment through Sudan Relief Fund. That’s 133,000 lives you helped to save from this deadly disease. Through your partnership we’re stocking clinics, hospitals, orphanages, and schools with lifesaving medicines, and providing insecticide treated mosquito netting for children and families, to stop malaria before it starts.

These measures save lives – the lives of thousands of helpless children like Ibrahim, so they don’t have to become part of the tragic statistics. The scourge of malaria can be alleviated. More countries every year are being declared “malaria free” by the World Health Organization through similar prevention and treatment programs.

But the crisis in the flood-stricken areas of South Sudan is mounting. Malaria deaths are already rising alarmingly from the stagnant flood waters. Immediate and large-scale intervention is needed to prevent a widespread epidemic.

Please help us to rush malaria medicines to the flood victims, as well as supply mosquito nets for families and children. It is not a stretch to say thousands of lives will depend on receiving this help.

If you can, please consider monthly giving, to provide ongoing support for malaria treatment and prevention programs. These measures are making a difference, and with your gifts we can expand them to reach even more children and their families like Ibrahim’s.

PS – Please send immediate help to stop the rampant spread of malaria and thousands of preventable deaths. Children and families don’t have to die. You may even be able to make your gift go twice as far without giving a dollar more. Thousands of companies participate in Corporate Match programs. This means they match the amount you give to charitable organizations to double your gift! Click here to see if your employer participates in the program.