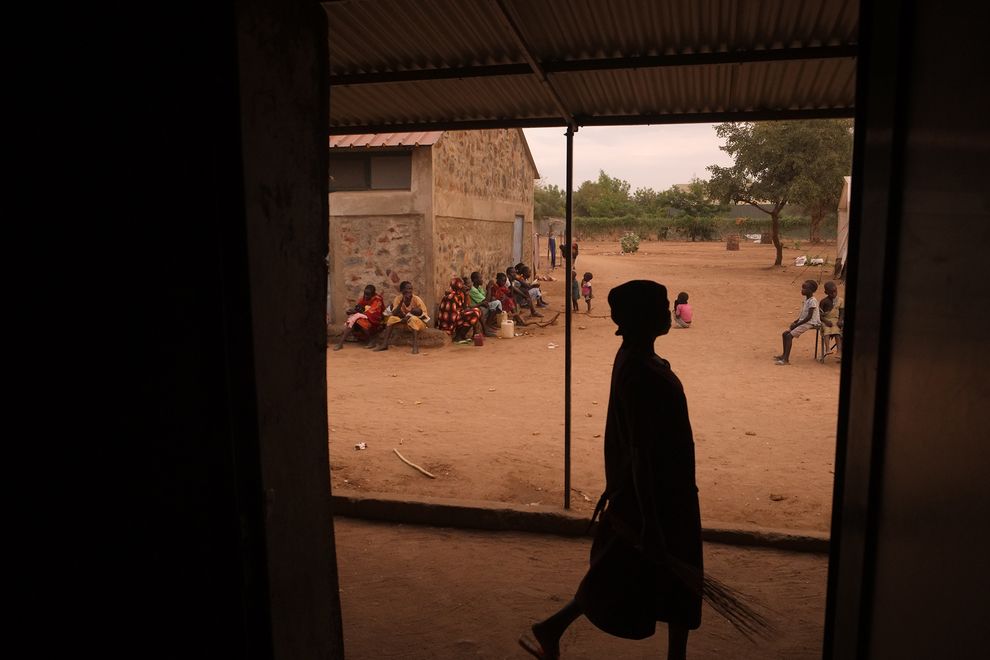 “The loud screech of the jet was almost immediately followed by the loud boom of the explosion.”

Tom Catena, a Catholic missionary doctor from the United States, is the only trained surgeon in the rebel-held part of the Nuba Mountains of Sudan. At the Mother of Mercy Hospital in the village of Gidel, he and his staff treat bullet and shrapnel wounds, malaria, leprosy, thyroid disease, burns, and cancer. Catena has performed dozens of amputations, many of them on children.

For years, the hospital was spared the bombs and rockets of Sudanese government aircraft. Until now.

On May 1 and 2, Sukhoi and Antonov warplanes pounded the area directly around the hospital with 11 bombs and rockets. The explosions knocked doors off their hinges and damaged windows and screens in the hospital, Catena says, but didn’t kill anyone. Some civilians in nearby areas were wounded by shrapnel. Many sick patients ran home or hid in the surrounding hills.

The conflict in the Nuba Mountains tends to be overshadowed by the civil war in South Sudanand the atrocities in Darfur. The Nuba rebels of the Sudan People’s Liberation Movement-North are fighting for greater autonomy from the government in Khartoum. The area they rule has no electricity grid, no running water, and very few latrines. Roads are rutted dirt tracks that become largely impassable in the rainy season, which is about to begin.

Mother of Mercy Hospital runs on solar power, and gets food and medical supplies by road from an airstrip in South Sudan. In recent weeks, government forces have launched a fresh offensive. Many tens of thousands of civilians have been displaced.

National Geographic spoke by Internet phone with Catena about the bombing at the hospital and the precarious situation in the Nuba Mountains.

Where were you when the first bomb hit on May 1?

I was on the female ward doing rounds. The loud screech of the jet was almost immediately followed by the loud boom of the explosion. So we all got down on the ground. We didn’t have time to get outside. The building shook, and all the dust and debris fell from the walls and the ceiling. We originally thought the bomb fell right outside in the courtyard. That’s how close it sounded.

Where did it hit?

It hit on the hill behind TB Village [where tuberculosis patients are treated], just outside the hospital compound.

So I ran up there, and then we heard the jet coming back. At the time, staff were digging a pit latrine in TB Village, so we jumped in the pit, maybe three meters deep. And we waited. I saw the jet go overhead and got a clear picture of its underside, so I’m sure it was a Sukhoi 24.

The second bomb dropped, and I was still down in the hole when they dropped a third bomb just by the fence near the staff residences. It hit in the road just next to the fence. So it blew the fence to pieces and destroyed a bunch of trees, damaged part of the guesthouse. The roof of my room and the guest rooms was kind of warped, the doors were blown in, the windows were blown open. The place where we eat, the wooden doors were knocked clean off their hinges.

Then the plane came back and made a very low pass. I was back inside the hospital by then. It made a very low pass and dropped two bombs just beyond us. The noise was deafening. I didn’t see the bombs drop, but somebody said they were rockets, not bombs.

Tom Catena talks to the mother of a sick child while making rounds at Mother of Mercy Hospital in the Nuba Mountains of Sudan.

There were reports that a drone had come before the attacks.

That was the previous Saturday [April 26] and the previous Monday [April 28]. We were having a meeting, and we heard this thing overhead that sounded like a lawnmower. It was like a model airplane, but a bit bigger than that, kind of buzzing around.

So they were doing reconnaissance around the hospital.

Yes. You can hear the Antonov [which has a particular sound]. Some people panicked and ran around outside. But most people did pretty well and got into foxholes. Six bombs were dropped then, all on the periphery of the hospital. You could hear the change in pitch as the bombs fell through the air, and the explosions after.

How many patients did you have before bombings?

We were pretty full, probably 300.

How many in the children’s ward?
Maybe 50.

How did the patients respond to the bombings?

The children’s ward, the female ward, and maternity all emptied out. They took off. A lot of them went home. Some went to a small mountain. A few came back Thursday night, and after the bombing on Friday, more people took off. There were maybe 15 or 20 patients who went up to the hills. We went up there Saturday just to check it out and see what was happening. People were just there hiding out. During the course of this past week, quite a few stayed up there. They’d come down to get their medicine, and then go back up the mountain. They were going back and forth.

Were there any military targets in the vicinity of the hospital?

No, there was nothing.

Did you get any warning?

Have you been getting more war casualties recently?

Not huge numbers. We get four or five at a time. There’s been quite a bit of fighting north of here. The Sudanese army has retaken some towns. The people there are all living in caves because the Sudanese army is shelling their villages.

I gather this is a last offensive before the rainy season starts, and that they are attacking on several fronts.

The main points have been north and northeast of here.

What about the dirt road to South Sudan?

Have you been able to get food and supplies?

It’s coming in a trickle, because there have been so many problems. Our truck turned over several months ago. It got destroyed. We’re still trying to get more things in.

How is the war in South Sudan affecting you?

If that fighting hadn’t happened, we’d be fully set by now with all of our supplies and food and everything. Everything could have come by road. But we haven’t been able to transport anything by road through South Sudan since the fighting started there. That’s been a huge blow.

Are you taking extra precautions now, thinking the bombers may come again?

We deepened the foxhole in our little compound, and we dug a few more foxholes. The main thing is that now, anytime you hear a plane, everybody takes off and runs for foxholes and jumps in.

They’re getting close enough where you can say they are targeting the hospital. They could have easily killed any number of patients. They were close enough. But I don’t think they want negative publicity. They are trying to play this double game: They are trying to terrorize people, but at the same time they want to get off the state-sponsored terrorism list and want to open up relations with the West because their economy is so terrible.

How are the hospital staff?

They are pretty shaken up. A lot of staff didn’t come to work for several days. Yesterday, a jet came and we heard it, and it bombed an hour or so north of here by road. The bombing sound was muffled. And some staff left then and haven’t come back. They’re traumatized by the whole deal. They’re still in that mode where any slight sound, people jump. You’re doing rounds and a vehicle starts, and people run to the hall saying, “What do we do?” There’s an increased startle response.

Things are starting to get back to normal now, but it’s been a very interesting week, to say the least.