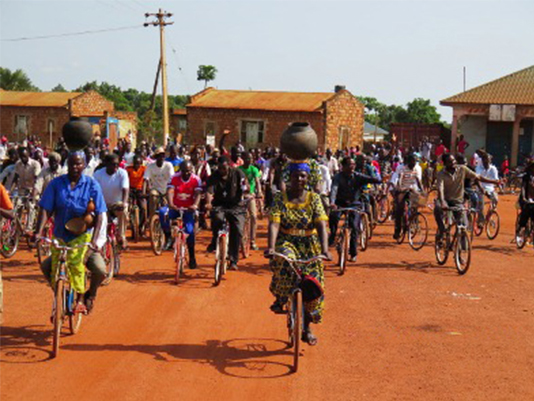 Citizens in Yambio ride for peace and co-existence

In a recent open letter, the Catholic Bishop of Tombura Yambio Diocese, Barani Eduardo Hiiboro Kussala is reminding leaders that “achieving peace demands of all of us that we act with real respect for human life. It demands that those who still sponsor anger, hate, segregation and violence against on another end such meaningless projects or ideas.”

In hopes of promoting peace and co-existence among the people, Bishop Kussala arranged a bicycle ride for the residents of Yambio, the capital of South Sudan’s newly created Gbudue state.

The ‘May they be one’ event was held at Gbudue stadium. Such bicycle riding activities are commonly organized in the region because it brings together different people, despite their positions and various ethnicity.

The governor of Gbudue state, Daniel Badagbu, expressed his gratitude towards the sports activities, saying they have the ability to boost working relations between citizens and transform societal cultures of war to cultures of peace and harmony.