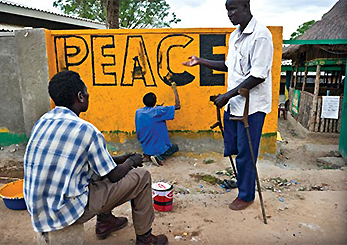 The Key to Making Peace in Africa

In December 2013, competing factions of South Sudan’s ruling party plunged the country into a horrific civil war as they fought over the spoils of the world’s newest state. Now in its fourth year, the conflict has ravaged the economy, resulted in tens of thousands of deaths, brought hundreds of thousands to the brink of famine, and displaced more than four million people, making this Africa’s largest refugee crisis since the 1994 genocide in Rwanda. And yet, amid all the suffering, a small clique of government elites and their cronies inside and outside South Sudan have benefited financially from the fighting, siphoning off the country’s oil wealth and storing the money in their private bank accounts and in luxury real estate in neighboring countries.

Remarkably, there is currently no coordinated strategy to disrupt the illicit siphoning of money by leaders and their foreign business partners. For leaders, giving up power almost certainly means losing access to their spoils, and it might even mean facing prosecution. This is the fatal flaw of peacemaking in Africa: those supporting mediation lack the leverage necessary to stop corrupt figures from using their forces to bomb, burn, imprison, silence, torture, starve, impoverish, kill, and rape to maintain or gain power.

Serious financial pressure with real bite is not only possible; it has proved effective in the past. As a start, sanctions must be levied against entire networks, not just individuals. Sanctions that target networks in this way are powerful tools for changing behavior and pressuring targeted individuals to come to the negotiating table. These “network sanctions” work because they affect not only the primary individual themselves but also those who are acting on their behalf and entities owned or controlled by the primary individual.

By sanctioning these individuals and entities at once, or in close succession, the individual’s network does not have enough time to absorb and adjust to the financial impact of being cut off from the U.S. financial system. Systemic sanctions would have a dramatic effect in South Sudan, the Central African Republic, and Congo, all places where interlocking kleptocratic networks involving political and military officials, allied businessmen, arms dealers, and international financial facilitators profit from mayhem.

For these sanctions to work, however, they need to be enforced.